Neeshad is an Environmentalist, Speaker and Social Change Advocate. He was distinguished as one of the ‘World’s 100 Most Influential People in Climate Policy 2019’ by Apolitical.

Neeshad’s work encompasses mainstreaming climate change issues across sectors and at multiple scales from national to local. His passion for youth advocacy and grassroots work in Qatar lead to visible impact when he co-founded the Arab Youth Climate Movement Qatar, a first, registered, Independent, youth lead grassroots non-profit association in the State of Qatar. His work in Middle East region has supported private sector, NGO’s, governments and multinational agencies in taking evidence-based decisions and deliver impact on the ground.

In January 2020, Neeshad Shafi was featured in the QLife magazine by Government Communications Office (GCO) of the State of Qatar as 10 Influential people in Qatar who have pushed the boundaries and represented Qatar on the world stage.

In March 2019, he was named in the Apolitical’s List of the World’s 100 Most Influential People in Climate Policy 2019. According to the selection jury, “The global list includes politicians, civil servants, academics and activists, whose work was indispensable in raising climate change awareness and highlights the people who are currently making the biggest impact on climate policy.”

In December 2018, Neeshad was also featured in live interviews on former US Vice President Al Gore’s 24 Hours of Reality – According to Climate Reality, which quoted “Neeshad Shafi who is inspiring young people across the Middle-East to fight for a sustainable future. Who voice you must hear.”

Womenpreneur; Country Organizer at Earth Hour Qatar. Also he is on board of CoalitionWILD Steering Committee, Climate Action Network (CAN) Arab World and Global Shapers Climate and Environment Steering Committee. 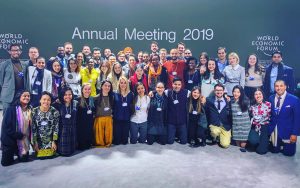 The Government Communications Office (GCO) has today launched the seventh edition of Q Life Magazine. Titled Qataris Abroad, this edition celebrates Qatar’s growing role on the global stage – from the

Over the past three decades, temperature increases in Qatar have been accelerating. That’s because of the uneven nature of climate change as well as the surge in construction that drives

Representatives from almost 200 countries met in Marrakech over two weeks for the latest annual climate change conference, COP22, which was viewed as an opportunity to showcase progress and commence

Over the past six months, Earth Talks Qatar has gained a reputation for attracting leading academics, thinkers and activists from all over the world. Knowledge of environmental issues and sustainability

THE new era of protectionism, marked by the United States' withdrawal from the landmark Paris Accord on climate change, will make things worse in the coming years. The move follows